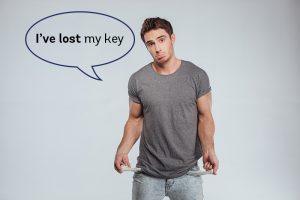 Tom is looking for his key. He can’t find it. He has lost his key.

He has lost his key = He lost it recently, and he still doesn’t have it.

The present perfect simple is have/has + past participle. The past participle often ends in –ed (finished/decided etc.), but many important verbs are irregular (lost/done/written etc.).

When we say that ‘something has happened’, this is usually new information.

When we use the present perfect, there is a connection with now. The action in the past has a result now:

Note the difference between gone (to) and been (to):

John is on holiday. He has gone to Italy. (= he is there now or on his way there)

Jody is back home now. She has been to Italy. (= she has now come back)

You can use the present perfect with just, already and yet.

Just = a short time ago

Already = something happened sooner than expected

Yet = until now. yet shows that the speaker is expecting something to happen. Use yet only in questions and negative sentences:

Note: you can also use the past simple (did, went, had etc.) in the examples on this page. So you can say:

Read the situations and write sentences. Use the following verbs in the present perfect:

Put in been or gone.