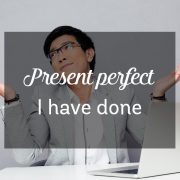 Tom is looking for his key. He can’t find it. He has lost his key.

He has lost his key = He lost it recently, and he still doesn’t have it.

The present perfect simple is have/has + past participle. The past participle often ends in –ed (finished/decided etc.), but many important verbs are irregular (lost/done/written etc.).

END_OF_DOCUMENT_TOKEN_TO_BE_REPLACED 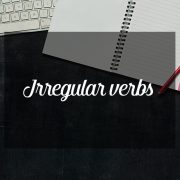 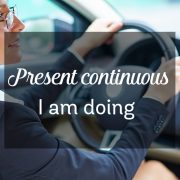 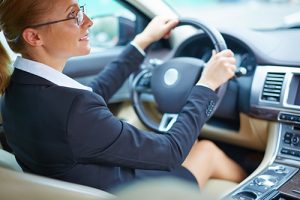 Have a look at the following example:

Sarah is in her car. She is on her way to work. She is driving to work.

This means, she is driving now, at the time of speaking. The action is not finished.

Am/is/are + -ing is the present continuous.

END_OF_DOCUMENT_TOKEN_TO_BE_REPLACED 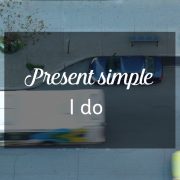 Have a look at this example situation:

Alex is a bus driver, but now he is in bed asleep. He is not driving a bus. (He is asleep)

Drive(s)/work(s)/do(es) etc. is the present simple.

They teach … but My sister teaches …

When to add -es

This rule applies to plural nouns and verbs after he/she/it.

y changes to ie before the ending –s

We use do/does to make questions and negative sentences:

In the following examples, do is also the main verb (do you do / doesn’t do etc.)

We use the present simple to say how often we do things:

I promise / I apologise etc.

I promise I won’t be late. (not I’m promising)

Use the following verbs to complete the sentences. Sometimes you need the negative.

You ask Dara questions about herself and her family. Write the questions. 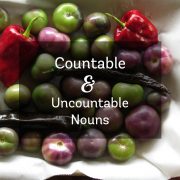 Let’s talk about nouns and quantifiers. A noun can be countable or uncountable. Countable nouns are those that refer to something that can be counted. They have both singular and plural forms. In the singular, they can be preceded by a or an. Most nouns are countable.

Some uncountable nouns can be used in the plural as well, depending on the meaning or context of the word. Take a look at these examples:

When to use much/many, little/few

Different quantifiers are needed for countable and uncountable nouns. Sometimes the noun can be omitted when it is understood from the context.

There is a difference between a few and few, and a little and little:

A. Complete the sentences using the following words. Sometimes the word needs to be plural (-s), and sometimes you need to use a/an. 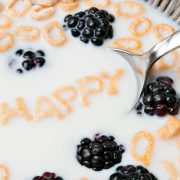 Prefixes and suffixes are sets of letters that are added to the beginning or end of another word. They are not words in their own right and cannot stand on their own in a sentence: if they are printed on their own they have a hyphen before or after them.

Prefixes are added to the beginning of an existing word in order to create a new word with a different meaning. For example:

Suffixes are added to the end of an existing word. For example:

Word creation with prefixes and suffixes

Some prefixes and suffixes are part of our living language, in that people regularly use them to create new words for modern products, concepts, or situations. For example:

Email is an example of a word that was formed from a new prefix, e-, which stands for electronic. This modern prefix has formed an ever-growing number of other Internet-related words, including e-book, e-cash, e-commerce, and e-tailer.

What other words can you think of that have a prefix or a suffix? Add your words to the comments below. 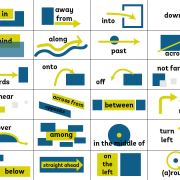 Well have no fear. In this article, you’re going to easily learn the definitions for the various prepositions related to movement and location.

Because prepositions don’t literally translate from one language to another, they can be one of the most difficult things for non-native English speakers to master.

But it doesn’t have to be difficult.

One reason prepositions can be difficult to wrap your head around [understand] is because it’s hard to visualize what they look like in your head.

However, prepositions related to direction CAN be demonstrated with images. So check out the image above (click to view at full size or Download the pdf). Then, for more information and examples, read the definitions below.

NOTE: All the links below will take you to an awesome song on youtube that gives you a real-life example of the preposition.

1. In/inside – when something is in the interior of a 3 dimensional object.

2. On – when something is on top of an object or surface.

3. At – expressing location in a specific place.

5. Under – directly below (generally 3 with dimensional objects).

6. Over – directly on top of, but not touching (generally from one side to another).

7. Below – directly underneath (generally with 2 dimensional objects).

8. Above – on top up/over something, without touching it.

1o. Through – moving in one side and out the other side.

12. Between – in the space between two objects.

13. Behind – at the back/far side of something.

14. In front of – the opposite of behind, a position at the front part of something.

15. Along – moving in a constant direction on (a path more or less horizontal).

18. Down – toward the ground or lower place.

19. Opposite – have a position on the other or further side of something.

20. Onto – moving to a location on (the surface of something).

22. Into – to become enclosed/surrounded by something else.

25. Next to/by/beside – in or into a position immediately to one side of.

26. Against – in physical contact with something, generally supported by it.

27. Over – expressing passage or movement across the top of something.